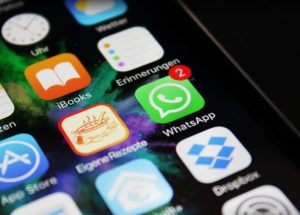 WhatsApp on phone, image via pxhere.com

EXECUTIVE SUMMARY: The “WhatsApp crisis” in Lebanon revealed a crack in Iran’s grand diplomatic strategy of using its proxies to push ideological soft power concurrently with hard power. Since 1979, Tehran has been trying to brand itself as the epicenter of the Islamic Revolution. That notion is being challenged—not by Lebanese tanks and Iraqi bullets but by citizens armed with smartphones.

No matter what Iran might want, the people of the Middle East yearn to be connected to the world, and their access to social media allows them to make contact. Their smartphones provide an excellent window through which western diplomacy can reach previously inaccessible populations.

Social media cannot create political change all by itself, but it can generate powerful sparks.

The WhatsApp messaging service has passed 1.5 billion users worldwide. For citizens of countries like Lebanon and Iraq, WhatsApp enables them to be connected to the rest of the planet at almost zero cost.

Ousted Lebanese PM Saad Hariri’s made a career-ending mistake when he attempted to tax WhatsApp usage as a means of compensating for the decline in usage of the national cellular companies. This attack on citizens’ connection to the world generated massive protests in Tripoli, Beirut, and Baghdad as well.

The initial demonstrations, which erupted solely to protest the proposed WhatsApp tax, evolved quickly into a forum for the expression of resentment of Iran’s influence in protests in both Lebanon and Iraq.

Iran was clearly unnerved by this. Qasem Soleimani, head of the Islamic Revolutionary Guards Corps’s shadowy Quds Force, was quickly dispatched to shut down the protests. Immediately after the first big protests in Iraq were launched, he flew uninvited by helicopter to the Iraqi Green Zone. That area is reserved solely for Iraqi government offices, and Iraqi PM Abdel-Mahdi and several high-ranking Iraqi security officials were surprised by his arrival.

The latest wave of protests may not lead to real political change, but it reveals cracks in Iran’s influence in countries it controls by proxy.

Today’s protests in Lebanon are much different from those of 2005. The protests of that era were driven by fury over the assassination of former PM Rafik Hariri (father of Saad) and were directed against the Syrian regime.

In today’s protests, when Lebanese and Iraqis say “no more” they are referring to Iran. It’s not only about Syria anymore.

Iran still holds strong influence among its proxies’ governments and militias‏ֹ, such as Hezbollah in Lebanon, the regime of Bashar Assad in Syria, and the Iraqi Mobilization Forces (PMF). But the people under the control of those proxies are beginning to chafe. This is why Hezbollah is worried. At first, Sheik Hassan Nasrallah, the head of Hezbollah, claimed the organization “stands for the protesters” and “expresses the pain of the people”—but supporters of Iran and Hezbollah are now taking the streets of Beirut back from the protesters while waving the armed movement’s yellow flags.

The more violence is committed against the protesters, the more likely it this‏ that this “digital spring‏ֹ” will become a cold winter. As Nasrallah put it, “This chaos will lead to security anarchy.”

In Iraq, the incessant siphoning of public funds to pro-Iranian militias has brought a strong anti-Iranian sentiment to the fore among Iraqis who are tired of Tehran interfering in their domestic issues. Not long ago, Iraqi protesters burned Iranian flags in front of Iran’s consulate in Karbala. Iraqi army snipers killed 150 protesters in October by shooting at their heads, and Iran is being blamed for those deaths.

Whether meaningful political change will result from the protests remains to be seen, but the seed for change has been planted. Iran will continue to do everything it can to stay upright during this wave of protests. It is as focused as ever on its ultimate goal‏ֹ: to become the dominant military superpower of the region.

Shay Attias was the founding head (2009-13) of the Public Diplomacy Department at the Israeli Prime Minister’s Office and is a doctoral candidate in international relations at Bar-Ilan University, where he is a lecturer at the Communications School.

Apex Legends Season 4: Assimilation will add plenty of new content to Respawn’s battle royale, including a brand-new sniper rifle. Though datamined assets and recent gameplay changes seemed to hint that Titanfall 2’s Volt SMG would be the next weapon added to Apex Legends, Respawn revealed the new weapon is actually the Sentinel.

“The Sentinel is a new sniper rifle–it’s a bolt action sniper rifle,” Apex Legends design director Jason McCord said in the Season 4 Reveal Devstream. “So it feels really powerful, it’s got that cool animation where you cock it back, and it’s a little different than our other sniper rifles because it has a charge mechanic.”

Given that Season 3: Meltdown already added a sniper rifle that requires charging, the Charge Rifle, it’s not immediately clear how the Sentinel differentiates itself–though it seems like the new weapon will behave similarly to a Triple-Take or Peacekeeper that has a Precision Choke attachment equipped. “Don’t wanna go too deep on [the charge mechanic] right now but it does give you a little more decision-making to do whenever you’re taking those shots.” McCord said. “Do you really want to try and take the most powerful shot you can take right now?”

Follow-up comments from Apex Legends community manager Jay Frechette seem to support the idea that the Sentinel is a sniper rifle that can fire quick but weak shots or a charged but slow single shot without the need for any attachments. “I’ve enjoyed playing with [the Sentinel] a lot as well,” he said. “It has that neat twist of almost having another fire mode.”

Respawn community coordinator Jason Garza also noted the fun he’s been having with it, responding to a Reddit thread about a previous leak that mistakenly included a shot of the Sentinel. “Lol, I’ve been quiet about this one, but I messed up when I was capturing a Crypto finisher and it shipped with that weapon showing,” he wrote. “But then I was like, meh. I’ll let you guys have fun figuring it out. Gotta say, you all didn’t disappoint. But this weapon is amazing, favorite gun for me ATM. Can’t wait for you guys to use it.”

Season 4: Assimilation will also see the return of Kings Canyon and the addition of a brand-new playable character, Forge. Assimilation begins on February 4.

Want us to remember this setting for all your devices?

Please use a html5 video capable browser to watch videos.

This video has an invalid file format.

Please enter your date of birth to view this video

By clicking ‘enter’, you agree to GameSpot’s

Now Playing: Apex Legends Season 4: Everything We Know In Under 3 Minutes

GameSpot may get a commission from retail offers.

As Esports Take Off, High School Leagues Get In The Game . News