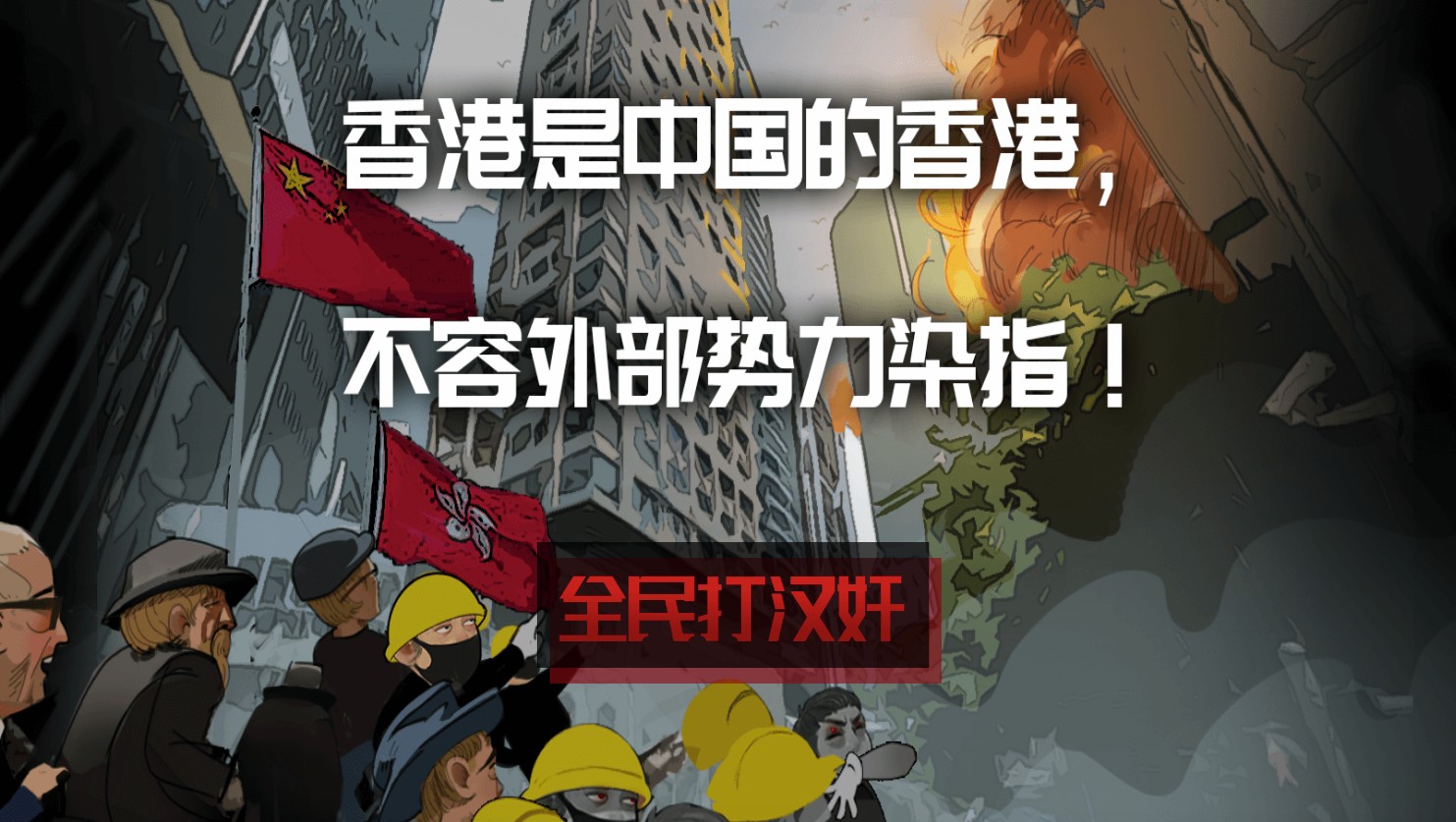 A browser-based video game is the latest front in the fight over democracy in Hong Kong.

Readers of George Orwell’s novel Nineteen Eighty-Four might remember the concept of the “Two Minutes Hate” that features prominently in the totalitarian society depicted within the book. Orwell’s description is one that taps into some of the ugliest aspects of mass psychology:

The horrible thing about the Two Minutes Hate was not that one was obliged to act a part, but that it was impossible to avoid joining in. Within thirty seconds any pretence was always unnecessary. A hideous ecstasy of fear and vindictiveness, a desire to kill, to torture, to smash faces in with a sledge hammer, seemed to flow through the whole group of people like an electric current, turning one even against one’s will into a grimacing, screaming lunatic.

Unpleasant, right? Now imagine that sensation, but as a video game. Actually, you don’t have to. The New York Post reports that a new video game has surfaced in China that’s more Orwellian than Orwell could have imagined. In it, “players can assault pro-democracy protesters and grotesque caricatures of known activists with weapons like bats and shoes by repeatedly tapping on them,” writes Adam Schrader.

The game’s title? The Post has it translated as “Everybody Hit the Traitors,” while Vice’s report on the game translates it as “Fight the Traitors Together.” Either way, you get the general idea.

Who created the game is currently a mystery. The South China Morning Post writes that coverage of it in state-sponsored media within China has been glowing — though that may be deceiving.

It’s not currently known who created the game, but it’s been reported by the state-owned tabloid Global Times, which claims the game is popular on Chinese social media. But searches show the game is barely mentioned on mainstream social media platforms WeChat, Weibo and Zhihu.

Elsewhere, Gizmodo reported yesterday that a number of pro-democracy games emerging from Hong Kong have been having difficulty getting approval to go live on the gaming platform Steam. Normally, political controversies around video games don’t end up having a huge impact. In this case, however, the stakes are incredibly high.

X Games Music: What to expect from Rae Sremmurd, Alesso, Illenium and Bazzi in Aspen

Over in the SuperPipe and on the slopestyle course the competitions may be all about bronze, silver and gold. But in the concert arena next door, the artists’ precious metal is platinum.

Friday, Saturday and Sunday night’s headliners Rae Sremmurd, Alesso and Bazzi are all platinum-selling pop stars of the moment. Along with Denver bass DJ Illenium, whose Saturday afternoon show was the first to sell out, these are artists who dominate clubs, pop charts and, of course, ski playlists.

X Games, since it started hosting stadium-style outdoor shows at the Buttermilk venue in 2015, has usually put a long-established hip-hop star or two on the bill (Snoop Dogg, Nas, Lil Wayne) but 2020 is straight from the youth and the zeitgeist, none older than 29 and all with recent runaway hits.

The concerts open with the prolific and eccentric Atlanta-based sibling hip-hop duo Rae Sremmurd, who’ve been on a run of hits that started with “No Flex Zone” five years ago. Saturday’s double-bill opens with home-state hero Illenium, riding high off his breakout 2019, and closes with the Swedish heavyweight DJ and remixer to the stars Alesso. After those three rowdy shows, R&B singer and songwriter Bazzi promises to wind things down with his luscious mix of delicate vocals and trap beats.

Here’s what to expect at the X Games music festival:

What’s New? Maybe “Sremmlife 4.” The Rae Sremmurd brothers have been teasing the release of a fourth installment in the LP series for nearly a year now. The international eyeballs and social media promotional machine of ESPN and X Games just might be what the duo has been waiting for to make a surprise album drop. If not that, count on some previews of unreleased tracks.

What to Expect: A relentless hit-after-hit party of a set from a young and still-hungry duo that’s on top of the hip-hop world at this moment. Swae and Slim Jxmmi tend not to waste time in concert — they’ll play fan-pleasing, truncated versions of the tracks everybody in this crowd is going to want to hear, backed by Mike Will Made-It’s era-defining beats and some remixes, plucking from the Rae Sremmurd catalog, their solo material and guest spots (yes, expect the Swae/Post Malone mega-hit “Sunflower” on the set list).

What’s New? Pop stardom. Around here, Illenium’s been a staple of the EDM scene since his days as a University of Colorado-Denver student and his early releases in 2013 and 2014. But his LP “Ascend,” released in August, and singles like “Good Things Fall Apart” (with John Bellon) and “Takeaway” (with The Chainsmokers and Lennon Stella) saw him crossing over to the top of the pop charts.

What to Expect: A triumphal home-state celebration of Illenium’s sold-out X Games moment. The throngs of CU-DU-CSU students who fill the X Games concert crowds are the same who filled Illenium’s Denver club shows before international superstardom hit. He’s playing his home turf, so expect him to make it special.

What’s New? “In the Middle,” a hooky collaboration with SUMR CAMP released this fall.

What to Expect: At least a dose of old-school Swedish house music. After winning millions of fans with pop collaborations and remixes with the likes of OneRepublic and Florida Georgia Line, Alesso last year released the three-track progressive house mixtape “Progresso Volume 1” that celebrated the old rave style.

What’s New? “Soul Searching,” the 22-year-old multi-instrumentalist and R&B singer’s debut mixtape, released in August. Including the breakout hit “Paradise,” it followed the stratospheric single “Mine,” from 2017, and Bazzi’s sprawling debut album “Cosmic,” from 2018.

What to Expect: Public make-out sessions and maybe the best time you’ll have all weekend. X Games in recent years has nailed it with their Sunday afternoon bookings and been blessed with sunny weather for laid-back closing day shows from artists like Kygo. Bazzi’s sexy, electronic-infused R&B fits the bill for another beautiful paradise of a Sunday in the snow at X Games with a fitting soundtrack.

To the Edge and beyond

X Games Music: What to expect from Rae Sremmurd, Alesso, Illenium and Bazzi in Aspen