Final Fantasy VII Remake is less than two months away and it is one of the most highly anticipated releases of 2020, and Square Enix just rolled out a handful of screenshots to showcase. New gam designs, Tifa’s move and abilities, some side quests and most importantly, photos of summons.

Looking at these series of photos, Chocobo Chick looks pretty much decent until you get distracted from its widely stretched forehead, although it is not that bad as compared to Carbuncle that looks like a toy that some kid accidentally stepped on and became just complete flat right of the bat. 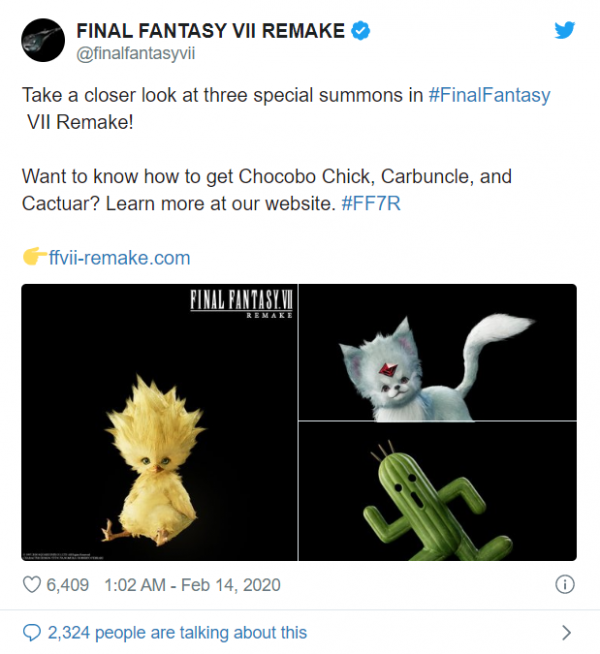 Fans took their reactions to these cute but little bit creepy new shots to Twitter which were generally positive but some fans of course, had a little bit of laugh at some of these summons, turning  Square Enix’s rollout into a series of memes. 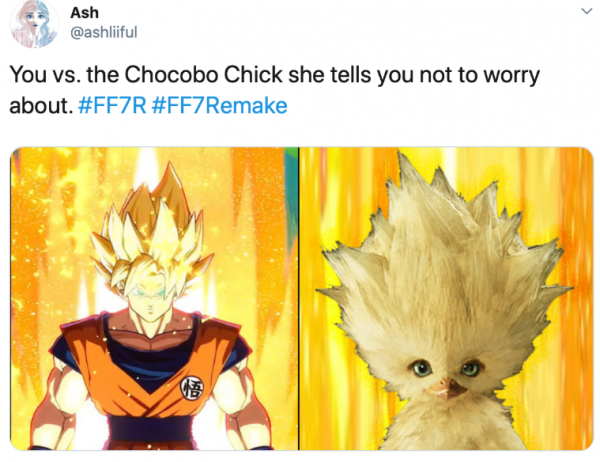 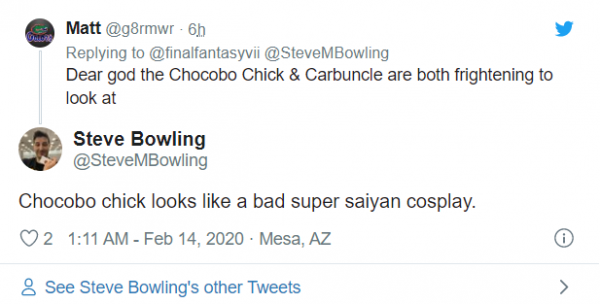 Read Also: [LEAKED] Fortnite Chapter 2, Season 2 on the Way With Leaked Details Including A New Gun

What is Final Fantasy 7 Remake?

First released in 1997, one of the most talked about and played game, immediately took its place on the top of the charts as the best JRPG (Japanese Role-Playing Game) title ever and introduced millions of gamers all around the world to this genre. Players will be able to control Cloud Strife as he and eco-terrorist group AVALANCHE battle a megacorporation and a legendary soldier. This gameplay also combines real-time action

Five years after it was announced at E3 back in 2015, die hard Final Fantasy players will now have a remake exclusively to the Playstation 4 in episodic installments. They also redesigned the characters to balance realism and stylization. There have been multiple trailers and some tech companies already had a hands on experience at Gamescom 2019 and E3 2019. It has also been confirmed that Final Fantasy 7 Remake will first come to Playstation 4 but might also come to other platforms in 2021.

When is the release date?

Final Fantasy 7 Remake is due for release on April 10 which should be set in stone after it was first announced that it was going to be released on March 3, unfortunately being pushed back. As for cross-generation release, it is also expected that FF7 Remake would also release on both Playstation 5 and Xbox Series X alongside other current generation consoles.

The game has been under development since 2014 and fans around the world are anticipating to play the remake filled with nostalgia and good childhood memories. It is pretty well known that FF7 is one of the greatest games ever produced and played, bringing it back would give recent generations who never played the game before a chance to experience this wonderfully made game that is Final Fantasy. 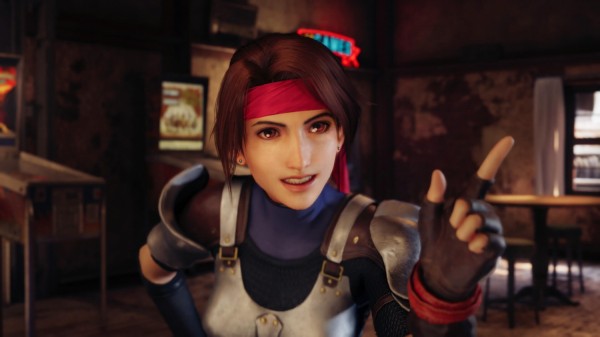 Read Also: New Apex Legends Character Might Be On the Way As Valentine’s Day Event Draws Near

In this week’s top stories: A fake iPhone 9 makes the rounds, new iOS 13.4 beta, watchOS 6.1.3 is released for everyone, March Apple keynote rumors, and more. Read on for all of this week’s biggest news.

Leading off this week, Instagram CEO Adam Mosseri made headlines for explaining why the company hasn’t adopted the iPad yet. According to Mosseri, the reason for Instagram’s iPhone-only app is that the company doesn’t have the resources to develop for both platforms. He explained that Instagram has “lots to do,” and all of it is apparently more lucrative than an iPad app would be.

Apple this week released the latest betas of its next round of updates, this includes iOS, iPadOS, and tvOS 13.4, as well as macOS 10.15.4 and watchOS 6.2.The first beta of iOS 13.4 included a handful of notable changes, but beta 2 works on refining those features.

One of the few changes in the second beta is that the Mail app toolbar has been redesigned yet again. In the first beta, Apple reverted the toolbar to the pre-iOS 13 design, but with this week’s update, Apple has removed the flag option completely and rearranged the icons, adding a new compose option instead.

Meanwhile, with the latest macOS 10.15.4 beta, users can now access real-time lyrics for Apple Music content in the Music app. To access lyrics in the Music app, look for the small quotation button in the upper-right corner while playing a song. Find more details in our full coverage here.

watchOS 6.1.3 was released to the public this week. watchOS 6.1.3 includes improvements and bug fixes, including a fix for an issue that prevented the irregular heart rhythm notification from working as expected for Apple Watch owners in Iceland.

In iPhone news, an iPhone 9 hands-on video made the rounds on TikTok this week — but we quickly debunked it as a fake. Read more on that story here.

Apple was forced to issue an investor update this week detailing that it won’t hit its Q2 earnings range due to the coronavirus outbreak in China. Apple cites two main reasons for this: worldwide constraints for iPhone supply and demand for Apple products within China.

Last but not least, a Bloomberg report on Thursday detailed that Apple is considering adding the ability for users to set third-party apps as defaults on iOS, overriding the built-in preference for Apple’s Safari and Mail. The company is also reportedly considering adding native support for third-party streaming services such as Spotify on HomePod.

These and the rest of this week’s top stories below.

Listen to a recap of the top stories of the day from 9to5Mac. 9to5Mac Daily is available on iTunes and Apple’s Podcasts app, Stitcher, TuneIn, Google Play, or through our dedicated RSS feed for Overcast and other podcast players.

Sponsored by MacStadium: Get 50% off your first two months of a Mac mini subscription now w/ code 9TO5MAC, or get started with MacStadium’s new Orka private cloud.

Matt Birchler really gets the Apple Watch. Not just where it is and where it’s been, but where it could go next. Since watchOS 3, Matt has produced the absolute best eye candy concepts of how future software versions could evolve.

9to5Mac Happy Hour is available on iTunes and Apple’s Podcasts app, Stitcher, TuneIn, Google Play Music, or through our dedicated RSS feed for Overcast and other podcast players.

John and Rambo continue their adventures into building apps with SwiftUI, talk about the newly released Swift Playgrounds app for Mac, and discuss the dilemma of Apple promoting their own services across iOS. Also, unit testing, monetizing an app through donations, and much more.

Stacktrace by 9to5Mac is available on iTunes and Apple’s Podcasts app or through our dedicated RSS feed for Overcast and other podcast players.

Apple @ Work and Making the Grade |

Apple @ Work is a weekly series from Bradley Chambers covering Apple in education. Bradley has been managing Apple devices in an education environment since 2009. Through his experience deploying and managing hundreds of Macs and hundreds of iPads, Bradley will highlight ways in which Apple’s products work at scale, stories from the trenches of IT management, and ways Apple could improve its products for students.

Subscribe to get all 9to5Mac’s stories delivered to your inbox daily. And to 9to5Toys for the best deals from around the web.

Check out 9to5Mac on YouTube for more Apple news: